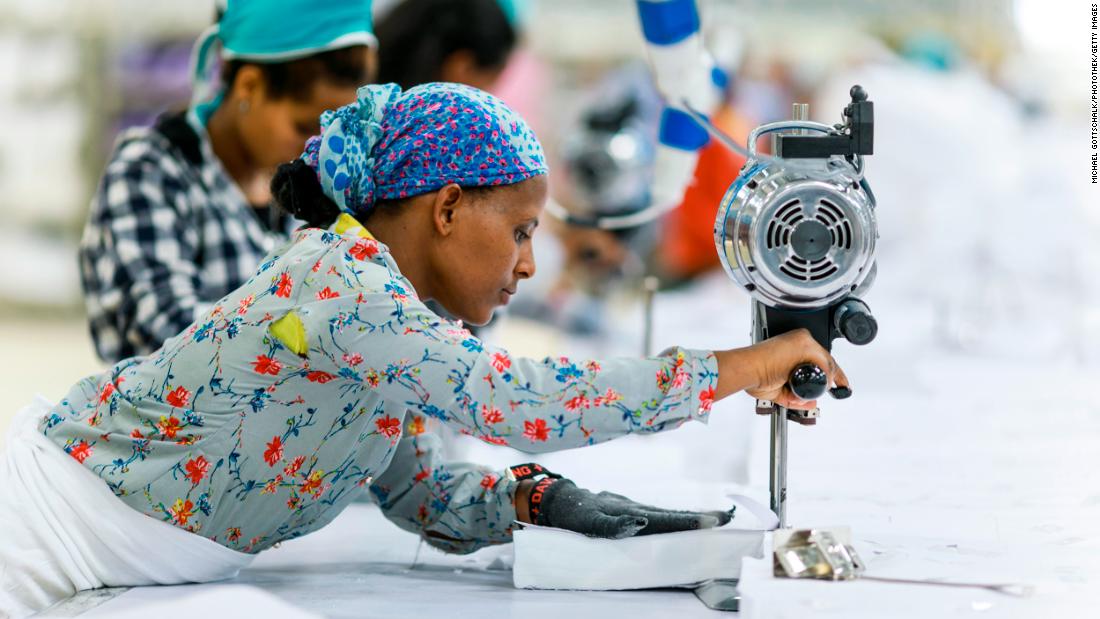 With a range of economic incentives like the freshly built industrial parks for garment manufacturing, Ethiopia has positioned itself to become one of the world’s top exporters of textile and garments.

It even plans to boost its clothing exports to a total of $30 billion a year from its current $145 million.
But a report by the New York Stern Center for Business and Human Rights shows that despite the growth in the garment market, Ethiopian garment factory workers are, on average, the lowest paid in the world.
The country does not have a private sector minimum wage, and workers are paid $26 per month — far from enough to cover basic needs like housing, shelter, and food.
Their counterparts in South Africa earn a higher wage: $244 per month; and those in Kenya, $207.

The authors of the report, Paul Barrett and Dorothee Baumann-Pauly, focused on the Hawassa industrial park, 140 miles south of Addis Ababa, the country’s capital.
The park, one of five manufacturing hubs established by the government since 2014, is part of a long-term vision to grow Ethiopia into a production hub. It houses factories including textile and agro-processing and has 25,000 employees producing garments, according to the report.
Paul Barrett who is also the deputy director for the New York Stern Center for Business and Human Rights, says the government’s strategy from the beginning was to attract foreign investors by charging very low wages.
“They pointed to the $26 wage because that is the amount that employees of the government are paid. So, they used that as a benchmark for employees in the foreign apparel market too” he told CNN.
“The eagerness to please foreign fashion companies has led to miscalculations”, reads the report. “The main error the government made was to assure Asian suppliers and Western buyers that Ethiopian sewing-machine operators would contentedly accept extremely low base pay.”
The report added that the workers, mostly women from rural areas, do not get enough training and struggle to understand industrial rules and regulations.
“For many young women, frustration over their pay, combined with homesickness and other aspects of factory life, has led to a sense of alienation and lack of commitment to working productively,” says the report. “Unfamiliar with industrial custom, they don’t understand why they would be disciplined for lateness, absenteeism, or chatting with workstation neighbors”
Worker councils usually exist to advocate for the well-being of factory employees. But Ethiopia, with a population of 105 million, has a weak trade union movement, says the journal of labor and society.
So far, there hasn’t been any recognized body advocating for better work conditions, training and pay for the garment workers at Hawassa industrial park.

Barrett says the government needs to establish a minimum wage to ensure decent living conditions for the factory workers.
He also suggested extensive training, so factory workers can become better accustomed to the industrial work ethic.
“The workers need training of two sorts. First, hard skills, like how to actually work the machines for making clothes. And then soft skills, such as the customs of working in an industrial environment,” he said. “They need to be told about being on time to work, that they can’t necessarily stop in the middle of work and chat with the next person. Things like that. These kinds of adjustments bring a lot of potential for success”
CNN reached out for comment on the report. The press secretary for the Ethiopian prime minister referred the request to the ministry of labor and social affairs.
Meanwhile, Barrett says, while writing the report, senior government officials convincingly informed the Stern Center for Business and Human Rights that for the first time, it was considering a minimum wage for the private sector.
“They said part of why they were thinking about it [a minimum wage] is because of the garment industry,” he said.
What’s your Reaction?
+1
0
+1
0
+1
0
+1
0
+1
0
+1
1
Facebook Twitter Email
Loading...